There’s only one use for this bizarre ‘Swamp Thing’ style miniature that I can think of.

A pumpkin head horror, part natural spirit, part animated vegetation stalking the inhabitants of an 18th Century American Colonial hamlet. Angry at the loss of his ancestral lands under the plough he’s picking off individuals at dusk as they attend to their crops or hunt game in the woods. The local Native Americans know all about him of course but the Colonialists think he’s a wild superstition concocted by the Natives to divert blame for their murderous activities against the settlers.

The idea could easily be extended out to a fantasy wargame using Pumpkin Head as a GM controlled monster stirred into action upon the PC’s units entering a particular area of woodland etc. 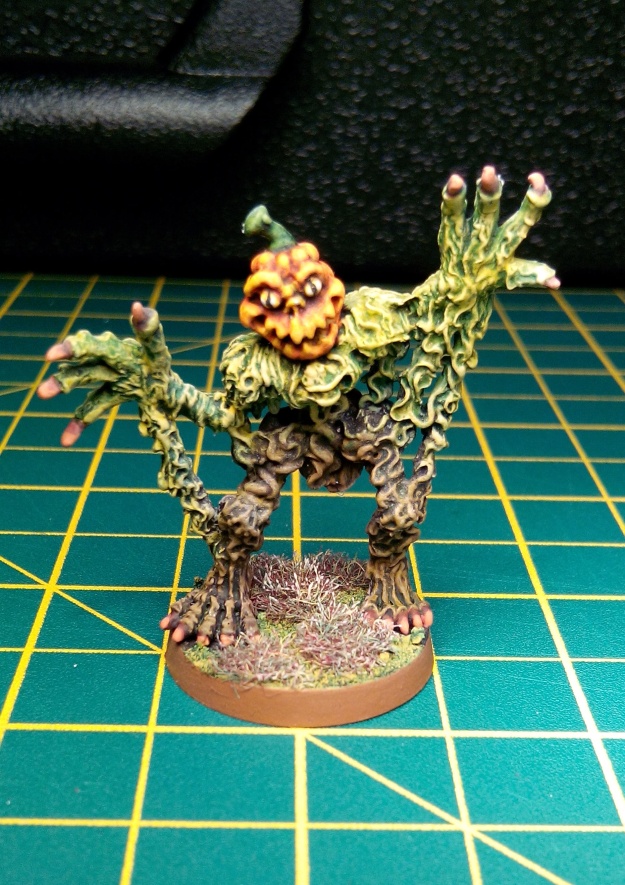 I’ve always loved the concept of the Beastman. Historically it’s been a part of mankind’s mythology since prehistory of course and as a result features in many fantasy game settings. Runequest Broo are the earliest gaming interpretation that I know of but I’m sure there were others prior to that, especially if creatures like the ‘Pig Faced Orcs’ from early D&D are included as contenders.

For me the Beastman made his first real presence in the dark and sinister forests of 1st Edition Warhammer Fantasy Roleplay. PCs staying in Coaching Inns on forest roads or passing through small Hamlets in the woods could easily be unsettled by stories told by the locals. Bellowing horned beasts that come from the trees after darkness, wild creatures running on two legs but with cloven hooves instead of feet, clawing and goring anyone foolish enough not to barricade themselves in at night. These same beastmen are murdering and eating people in the Forests of the Empire right now as you read this…

What I’ve not been so keen on since returning to gaming is reading about the division of GW Beastmen into the whole ‘Gor’ thing – Bestigor, Ungor, Bray, etc purely based on horns. Now I’m pretty sure this all started in the ‘Lost and the Damned’ book back in 1990 but it just doesn’t fit with me. I don’t understand all that regimented separation based solely on horns in a chaotic transient warband of animalistic killers.

Anyway, here’s a GW Beastman from the mid 90s recently purchased off eBay. I’ve painted it up with a cut down chaos warrior shield as it didn’t come with it’s original. 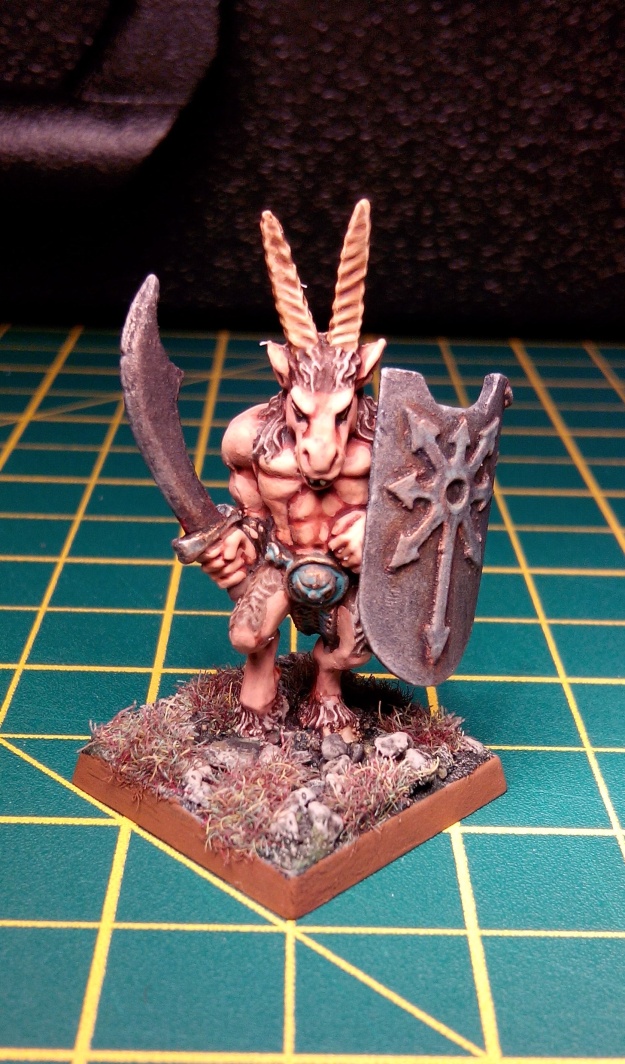 This little figure is full of character and makes for a great vertically challenged magic user/scholar/monk type figure. 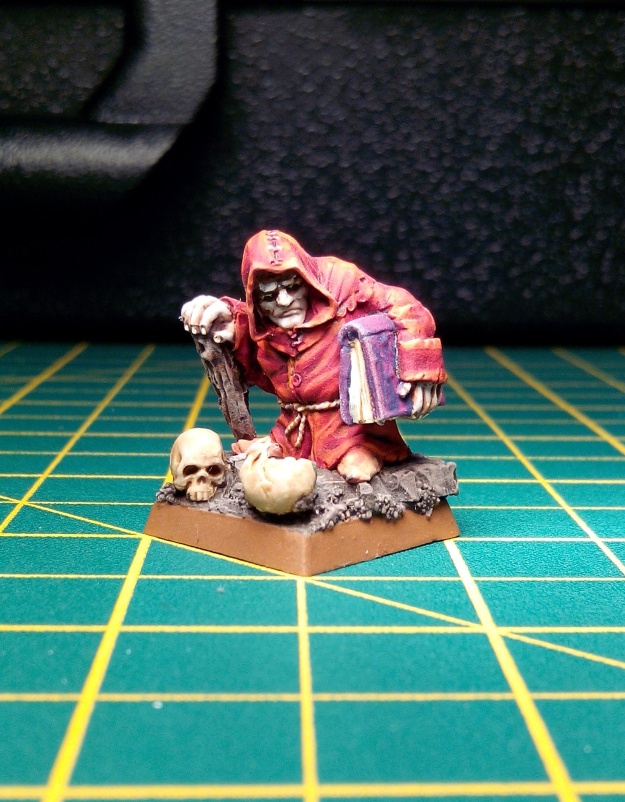 Perhaps the biggest plus with this miniature is that despite his lack of height he hasn’t been sculpted with a beard which frees him of the ‘fantasy dwarf wizard’ label that could easily have been thrust upon him if he’d had one, leaving him much more of an versatile model for different genres.

These GW marauders are part of the small generic evil/chaotic warband I’m slowly painting up.

Horned helmets are of course headgear de rigueur for fantasy barbarians everywhere and also the historically incorrect debonair Viking about someone else’s town on the pillage.

I’ve always liked the look of the keratin embellished hardhat despite the fact that any warriors wearing them would surely suffer broken necks or have them knocked off their heads pretty quickly in a fight. 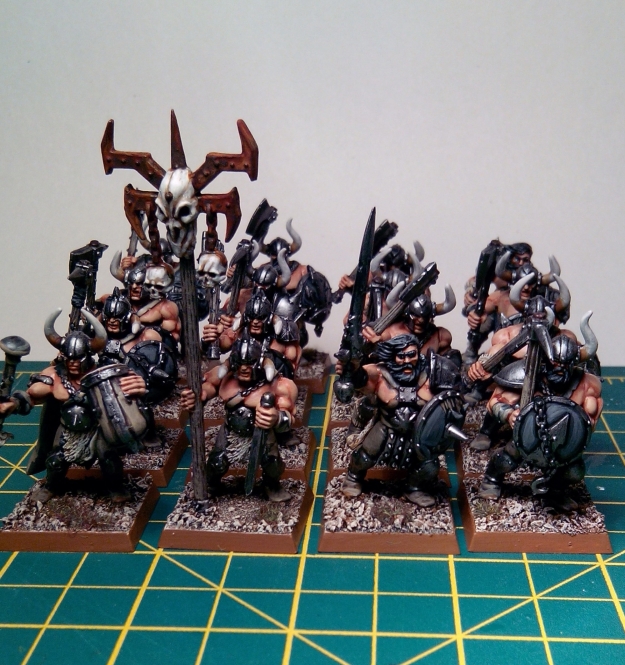 Recently I’ve been searching for cheaper options than Games Workshop’s command miniatures for a small fantasy generic evil/chaotic force I’m assembling. The figure of Anval Thricedamned caught my eye whilst searching through Reaper’s Bones range as a suitably imposing champion.

Reminiscent of Carl Critchlow’s Thrud the Barbarian – muscular to the extreme but with a miniscule head – he also put me in mind of the mutation ‘Pinhead’ from the D1000 chaos attribute chart in the ‘Slaves to Darkness’ book.

To be honest I wasn’t particularly taken with the original tiny head on Anval. The detail on it seemed pretty poor so I decided to swap it for a spare head from GW’s Warriors of Chaos box. 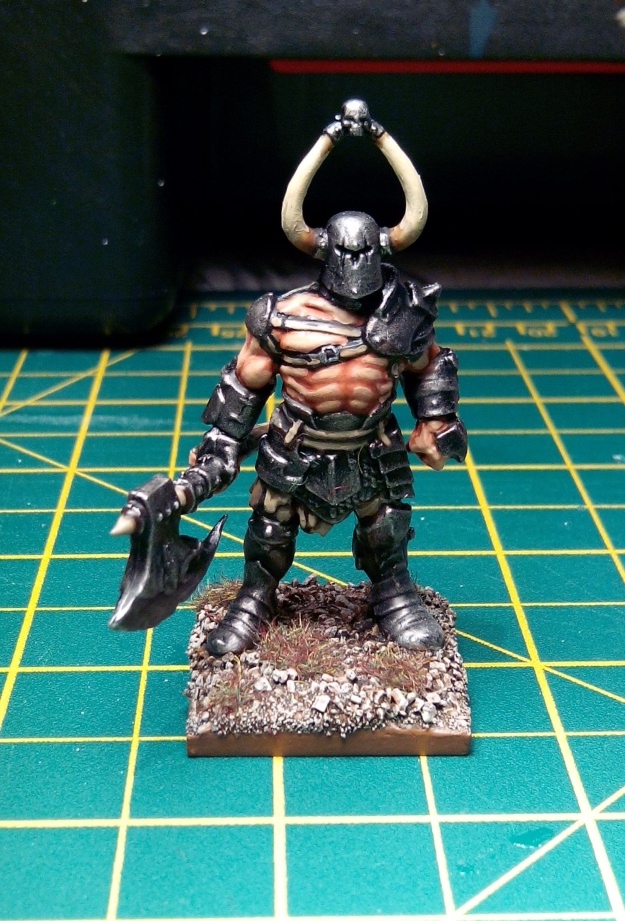 Whilst the soft plastic of Bones Miniatures might make face detail less defined in comparison to harder plastics it does have the advantage of making basic conversions like this very quick and easy to accomplish.

Entitled ‘Sinessa – Hellborn Sorceress’ this Reaper Bones miniature looks to me like many of the female magic users Tony Ackland drew in the early 80s. From memory a fair few of those illustrations graced the pages of the first edition of Warhammer Fantasy Battles (the pale green box with the 3 black books). 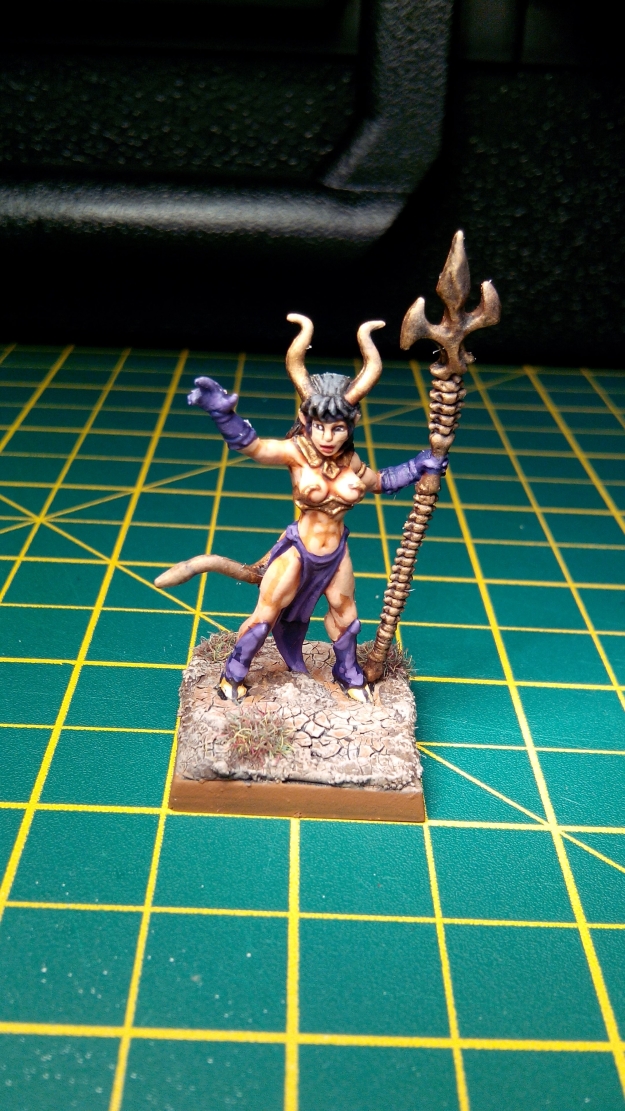 I envisage mine as a Dark Elf or Chaotic Sorceress of some type. I particularly like the cloven feet – a nice touch by sculpter Bob Ridolfi.

I didn’t play much AD&D as a youngster (although I did try to get a game of Labyrinth Lord together a few years back but to no avail) so Mind Flayers (or Bathalians as Reaper call them) don’t really mean a great deal to me.
That said I do like the idea of a tentacled magic user so here’s a  Reaper’s Bones Bathalian.

Although I probably don’t intend to use this particular model because of the purple skin I do want to get another one to use in a planned Cthulhu Cult alongside GW Genestealers, Wargames Factory Shock Troopers and some Wargames Foundry WW2 German NCOs I’ve purchased.

Long time no posts. All the usual reasons for that of course but I’ve still been painting and have lots of projects lined up for the future.

First up is a Reaper ‘Bones’ troll. Reaper’s Bones range is well known to everyone so I’m sure there’s no need to expand on that too much. However the sculpting on this model reminded me of 1985 buying my first Citadel troll by the Perry Twins  – Rattlebones Bowlegs. 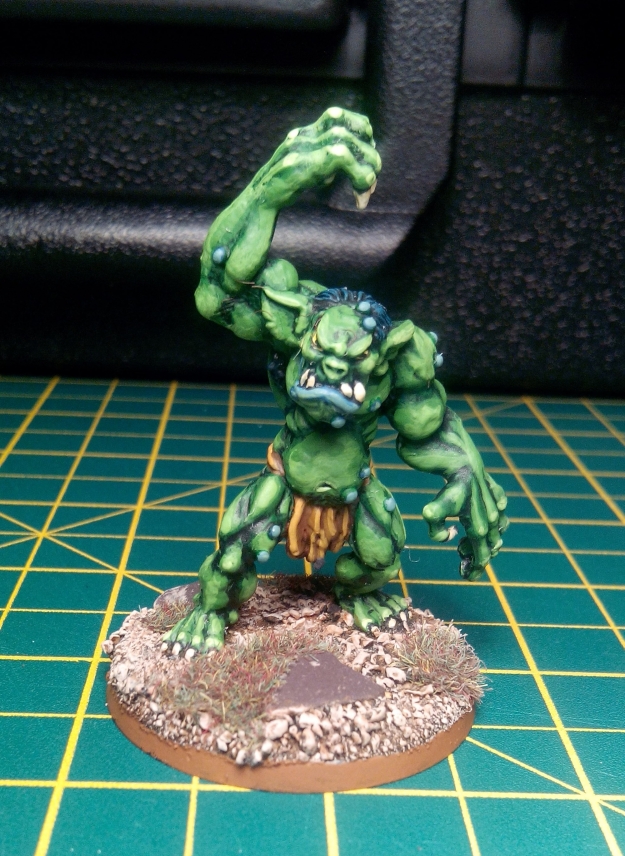 The original Citadel C20 troll range held a fairly diverse set of characters of which 6 Perry Twin sculpts and 2 later Marauder models became my completed unit of 8 trolls for Warhammer from the early 1990s onwards.

Looking at the Reaper miniature, thinking about the C20 range (and seeing the prices those original castings now go for) got me thinking about alternative troll models.

In about 1993 a work colleague sold me a small shoe box of random lead miniatures he’d collected himself and acquired from an older cousin. The contents were a true delight of Citadel (pre and early slotta) and Grenadier models – many complete with random daubings of Humbrol enamel paint as expected.
Amongst it all was a Nick Lund troll sculpt with shield and stone war hammer. Although I had Lund’s Black Orc Mother Crusher miniatures as a regiment in my orc/goblin army this figure didn’t fit trollwise with the C20 range so always remained unpainted until lost in 2003 with the rest of my collection.

So with a desire to have a few different looking trolls but remembering the past I purchased an identical shoe box troll off eBay cheaply (minus shield but what self respecting troll would use a shield anyway??) and he painted up quite nicely in the same vein as the Reaper one. 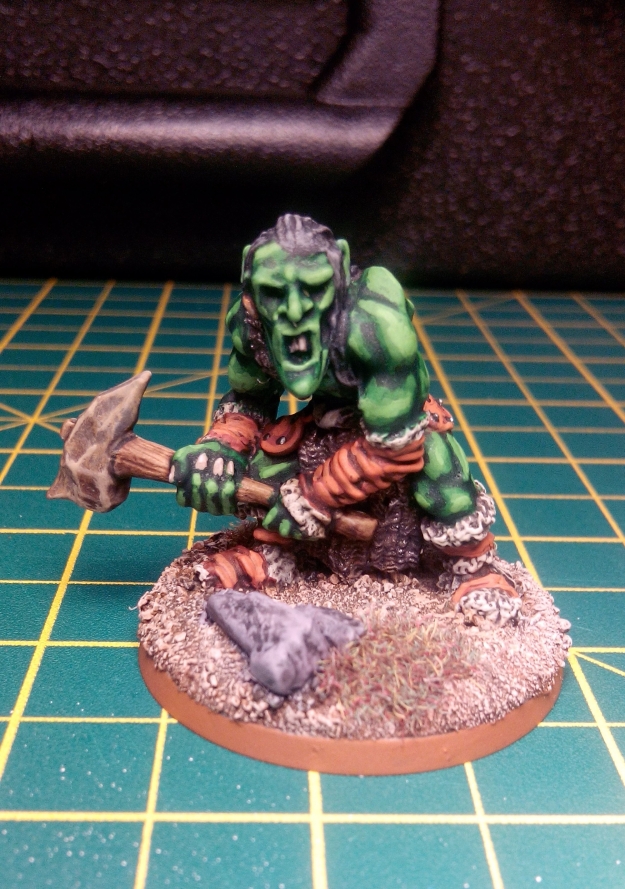 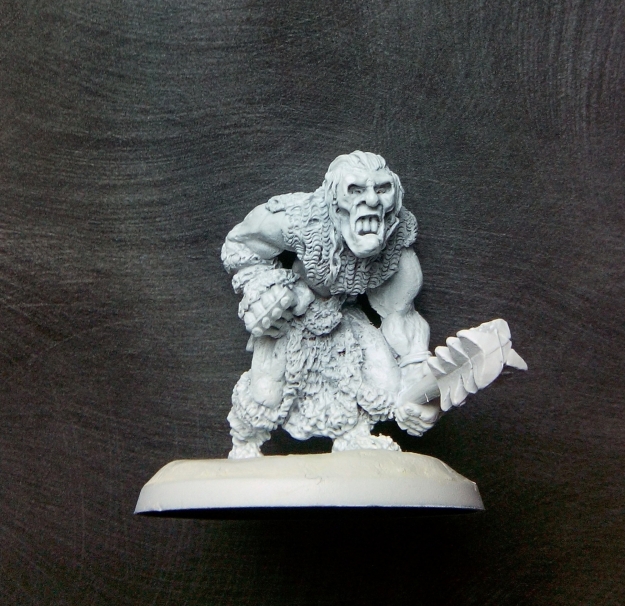