Another couple of the miniatures from Essex painted up.

The first is described as a ‘Scaley Orc: Rabble with Axe and Dagger’. There’s definitely a reptilian feel to this, it put me in mind of an angry Barney the Dinosaur. I might buy another and paint it magenta…

Next up is a ‘Gnoll: with Cutlass’. At some point in time it was universally settled that Gnolls would be based on Hyenas rather than just being vaguely canine. This miniature predates that. 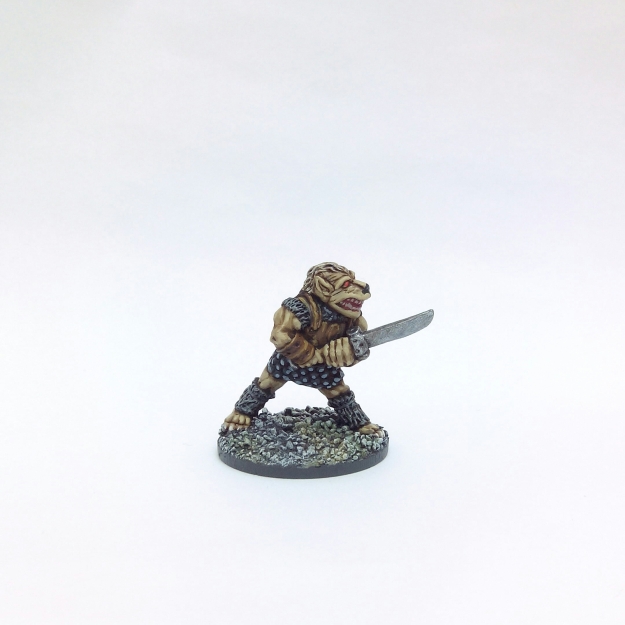 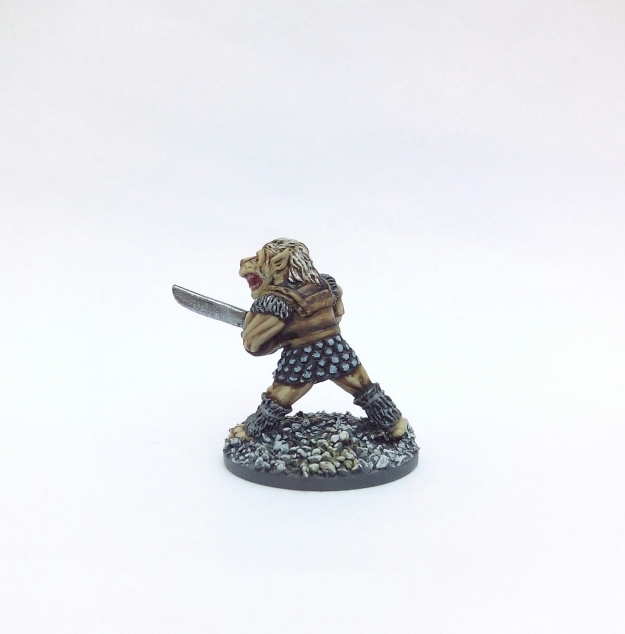 Back in the mid 80s my old friend ‘L’ introduced me to Essex Miniatures via a couple of Medieval and Roman figures he’d picked up at a Wargaming Show.

I sent off for a copy of the Essex catalogue and spent far too much time flicking through it wondering just what the ‘Wizard in hood with magical staff’ or ‘Early Medieval Spearman in Scale Corselet and Helmet with Shield’ looked like. Back then, pre-digital, many small companies couldn’t afford to produce decent photographic images of their miniatures. You had to hope the imaginative descriptions applied by the manufacturers didn’t end in uninspiring lead blobs plopping through your parent’s letterbox 3 weeks later.

To be fair Essex did occasionally advertise in White Dwarf with photos. Although their products looked okay they weren’t strong enough to hook me in as I was preoccupied by Citadel Miniatures like a lot of kids in the hobby back then. Other manufacturers rarely got anything more than an annual request for a catalogue from me.

Come the early 90s my tastes had expanded beyond Games Workshop and I starting to get interested in historical wargaming with rulesets like DBA played with 15mm figures. Miniature Wargames Magazine occasionally showed Essex Miniatures in photos accompaning their articles and expansions for DBA. My interest piqued again.

I sent off for an Essex Miniatures catalogue and this time instead of just idly perusing I actually ordered a couple of ancient DBA armies in 15mm. I wasn’t disappointed. They were wonderfully sculpted, painted up beautifully and were inexpensive to boot. And then, for reasons unknown, I once again forgot all about Essex Miniatures.

Fast forward 25 years and a job lot of old miniatures purchased from eBay stirred my interest in Essex again. They’re still going and of course offer online ordering nowadays however somethings never change; not every figure has a photo, the Amazons are still dodgy (although none of them are portrayed as victims so there’s a minor plus) and not every sculpt is great – some could even be described as absolute howlers that were terrible even 35 years ago. After choosing a mix of fantasy and medieval figures I placed an order and it arrived very promptly.

Behold! Not a bad miniature amongst them in my opinion. Some of these figures were originally sculpted in 1981 whilst others are from slightly later – 1986. The keen eyed amongst you will spot the sculpting talents of Bob Olley here, pre-Iron Claw Miniatures. All came without problem mould lines or excessive flash which can often marr older sculpts and moulds. Splendid stuff. Please give Essex Miniatures consideration if their postage rates are sensible for you.

Here’s the Bob Olley Zombie figure from above painted up for use in my D&D game with the Cleric who enjoys the ‘Animate Dead’ spell a little too much.

A couple of miniatures destined primarily for use in my D&D game here.

First up is a Reaper Bones Dwarf Cleric – ‘Barden Barrelstrap’.

This miniature was going to be part of my (as of yet unassembled let alone painted) Dwarf KOW army. There’s still a chance he could get a secondment back into the army with a quick change of base.

Next is a Citadel Miniatures C11 Halfling ‘Dery Podgebelly’ 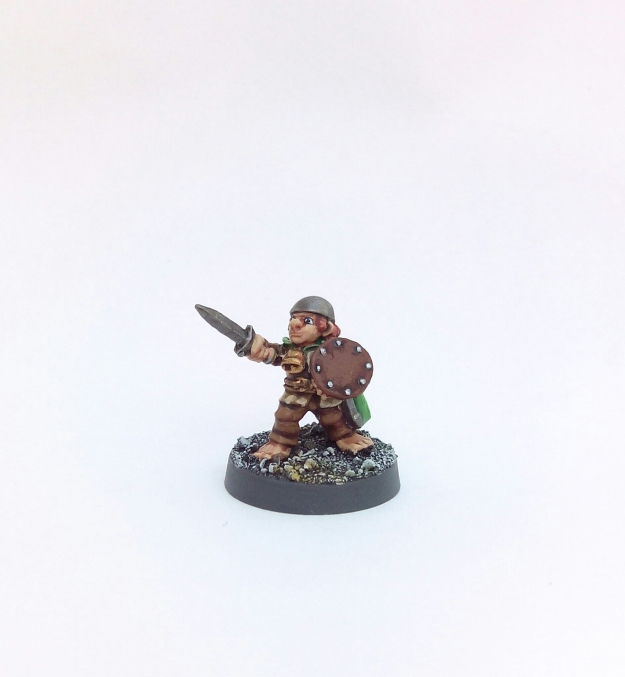 This miniature appears to be from 1986ish, I can’t seem to find any drawings or photographs of it prior to that. Needless to say it’s a tiny figure and is based on a 20mm round.

I’m not sure if I’ve ever mentioned my love for the original Games Workshop plastic Skeletons from 1991 before. I bought the Skeleton Army box (that included cavalry and a chariot) sometime around 1993 and it formed the basis (with Kev Adams metal Zombies and various other metal Wraith/Vampire/Necromancer miniatures) for my Undead Army of that period.

Yes there were only 4 bodies and 2 skull choices which limited options somewhat but it was a triumph for fantasy plastic which up to that point had struggled to be taken seriously. Previous attempts that included Fighting Fantasy 60mm, Drastik Plastik Orcs, Pychostyrene Dwarves and the Warhammer Regiment box designed for padding out WFB 3th Ed units had all been failures but the Skeletons marked a turning point in what could be possible.

I recently managed to pick up a few sprues worth on eBay along with a complete box of later Skeletons copyright 1999 on the box (presumably released in the 5th Ed period just prior to 6th Ed in 2000) which, although slightly chunkier, are fairly similar so I’ve now got plenty of bones to play around with. Expect more of these to show up periodically on the blog in future...

Here’s 3 of the original 1991 Skeletons quickly rustled up as extras for my D&D game. A Cleric PC has gained ‘Animate Dead’ spell and so insists on raising corpses as disposable ‘trap checkers’. I decided not to bother adding shields and just left them ‘as is’.